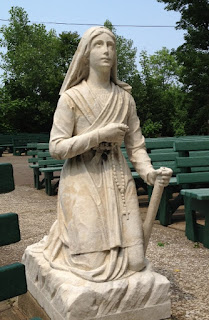 The 9th Apparition is perhaps the most famous because at this apparition, we were all given a remedy for our infirmities: the water.

It was nearly dawn when Bernadette was called to the Grotto and there were many people present. All these people could see was Bernadette looking under the rocks, going to the River Gave, and finally drinking the dirty, muddy water found under a rock at the Grotto and eating the weeds.  To those that observed this, Bernadette had lost her head.  To those without faith, she was a live comedy show, maybe what we today would call a reality show.  It wasn't until the next two Apparitions that things would become a little clearer.

People did not notice, as they laughed and doubted, Bernadette's behavior, the water was becoming clearer and flowing stronger.  The following day was the 10th Apparition.


At the 10th Apparition, we see Bernadette drink and wash a bit in the water.  We also see her on her knees kissing the ground and going up to the Grotto on her knees.  Bernadette tells us that the "beautiful lady" asked her to make this sacrifice for the sinners in the world.

Something very special is happening at Our Lady of Lourdes Shrine in Euclid as well.
In this Year of Mercy, Bishop Lennon has asked us to be one of the sites of the Holy Door in the Cleveland Diocese.  The other site is St. John's Cathedral.

Once again, Mary's Shrine becomes a site of great mercy and forgiveness.  For anyone who walks through the Holy Door, says an Our Father and Hail Mary for the intentions of the Holy Father, and goes to Mass and Confession a week before or a week after walking through the Holy Door, will receive a spiritual plenary indulgence.  This means that any time to be spent in Purgatory is lessened either for you, for a deceased person, a person you are praying for, or the Holy Souls in Purgatory.

Talk to your Parishes about making a Pilgrimage to Our Lady of Lourdes Shrine!  Experience the outpouring of Mercy!